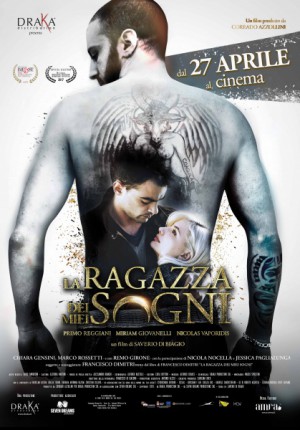 The Girl of my Dreams

Available for rental in dvd and blu-ray

A real genre bender, thist is a story of love. It is at one time, a fantasy tale, an explicit sex odyssey, a love story, a comedy: it is an experience for soul and body. It caters to different audiences, and it has a strong international appeal.

Magic and spirits leave behind dusty books and gothic settings to come into life in Bari, a modern city with an ancient tradition. “Everything is full of ghosts, if you know how to look” says the main character’s best friend, before plunging him into a world of beauty and horror that intermingles with the reality we think we know. It is a world of a subtle magic, made of coincidence more than flashy lights of perceptions more than super-powers. A subtle magic; but powerful, as all subtle things.

In 2008, with the direction of “Articolo 24”, presented at the International Film Festival in Rome, 2008, it is a participating film in “All human rights for”. “Qualche nuvola” his first effort, made an important impression on the critics; it was in the finals for the Solinas recognition in 2004 in the “Leo Benvenuti” category, and it was presented at the Venice Film Festival in 2012.