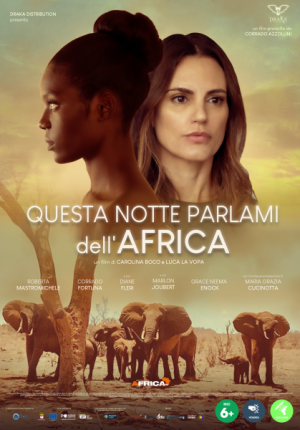 The encounter between two women becomes the exchange between the two worlds they represent: Europe and the Afro-Muslim world. Friendship knows no differences of race, religion or culture; it grows where two souls are willing to reveal themselves, creating an alchemy of universal value.

“Memories are important, as much as the dreams”

Emma (Roberta Mastromichele), a lawyer in a deep personal crisis, after the loss of her mother (Maria Grazia Cucinotta) decides to leave Italy for Africa. She joints her old friend Fé (Diane Fleri) and thanks to her she comes into contact with an association of activists involved in the protection of animals and local populations. Dylan (Corrado Fortuna), the founder of the association, is a mysterious and fascinated man, whom Emma will immediately nourish a strong attraction for. Nuri (Grace Neema Enock) a young local girl, from a very strict Muslim family, spends all her free time reading, secretly from her parents. For Nuri, books are the only way to travel and learn about the world. The girl finally gets permission to work for a few hours in the village school library and here she meets Emma and Finn (Marlon Joubert) a young activist with a stormy past. In the marvelous and contradictory scenarios of Kenya, where beauty mixes with corruption and the elephants poaching for the ivory market, the encounter of Emma and Nuri, two women so distant in culture and yet so similar in their need for freedom, it will push both of them to focus on their fears and desires. Across dangerous and intricate events they will both arrive at a crucial choice.