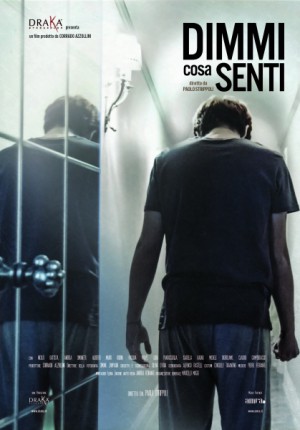 Tell me what you feel

Shot in Puglia by the young director Paolo Strippoli, the project is developed around the death of a fifteen Claudio, played by Nicolò Battista.

Main actors are Alberto Rubini (Adriano) father of the famous director Sergio, and Andrea Simonetti (Pietro),  an emerging actor and director from Taranto. They play the role of the two funeral agency employees, who is asking each other (as the most of people in town) “what that young guy should have feel…”

“Tell me what you feel” is focused on the mystification of truth, a voice of dissent but firm composed about a society that communicates prejudice and cliché, indifference, cynicism, apathy; where feeling is often trivialized as the only physical level, easier to understand.

A short film that makes you think, that touches you and with whom the director startes a deep reflection around a tragic event: so usual, unfortunately, in our time but which we probably don’t dwelt on enough.

A movie that speaks to young people  but not only;  a good example of the young director style.

Paolo Strippoli studied at the “Department of Performing Arts and Sciences” of the University “La Sapienza” of Rome. Starred in “La Ricotta e il Caffè” (2012) and in “Nomi e Cognomi”, both by Sebastiano Rizzo and produced by Draka Production, he lives the experience of the actor in order to better learn how to manage cast on the set. In 2011 he’s graduated at the “School of Arts and Communication,” by Francesco Martinelli and in 2011 he directed his first short film, “Conflict”, with co-directed by Silvia D’Oria (awarded for the “Best Photography “at the Giffoni Film Festival in 2012, the category” my Giffoni “); in 2012 is “In A Violent World,” presented at the “European Cinema Festival of Lecce.”
⟨⟨ Back