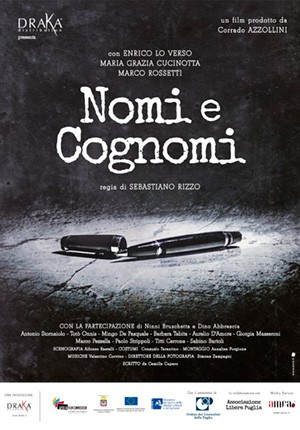 released on theaters on 2015 - available on dvd

Written by Camilla Cuparo, Nomi e Cognomi (Who’s who) is a film dedicated to the investigative journalism, which works respecting the unwavering professional ethics, that is considered as an inevitable and cheerful necessity of life.  A movie thought of and created for a YOUNGER GENERATION (those just starting off in life), the first which interacts with the protagonist, which receives his message of love for his work, for his ideals, for his ethics; the same generation which chooses him as a role model, in whom they are sure to find a team mate and a friend.

Domenico Riva, a well-known journalist in Milan, moves back with his family to his small hometown in Southern Italy. As director of the most important local newspaper,  he triggers a progressive social awakening of the town’s civil conscience. In fact, through the years, the town has tacitly accepted a status quo where shady dealings underlie a patina of legality … as if certain facts belong elsewhere. Nevertheless there are many relentless interactions that are part of the social aspect (and not only in the South) and on which investigative journalism is often called upon to explore, even running risks. Everything revolves around the specifics regarding an illegal waste disposal site which is the object of illicit ambitions. Riva and his men will do their job: they’ll report the facts. Reporting the truth has nothing to do with being heroes; it means following the principles and the methods which determine  a person’s professional ethics and this implies a choice that is almost a necessity.

Riva expresses love for reliability and for life, that is an encouragement for the  young people who follow him and who finally learn to believe, ” contented “, to trace a path and keep faith to the goals they pursue. In a series of successes and failures, victories and defeats, including personal issues, Riva will carry on his commitment and he will establish his own newspaper, in order to be “free without any owner”, even at the cost of big sacrifices that at the end will change the events and his whole life.