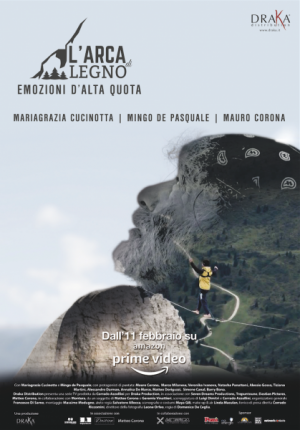 THE MOUNTAIN, THEATER AND COMPANION OF 11 EXTRAORDINARY STORIES

The Woody Ark is a TV series that tells stories of people connected to each other by a common scenario: the mountain and the choice of the extreme.
The mountain is the omnipresent scenario and the interpretative key of these stories, described as a acconplice and fearful companion, the background of a particular way of living. The feeling of the limit challenge, the risk calculation and the desire to follow passions, become the main drivers.
The series intends to bring out the shadows of the protagonists, the inner contrast between the choice of an extreme life and the crazy pleasure of living it.
No interviews, just the direct presentation of the protagonists, thanks to two exceptional figures that will walk along with the viewer on this high-voyage: MARIA GRAZIA CUCINOTTA and MINGO DE PASQUALE. Twelve episodies, each dedicated to a story; the opening and closing episode will be focued on one of the most esteemed mountain authors in the Italian literature of the last twenty years: MAURO CORONA.