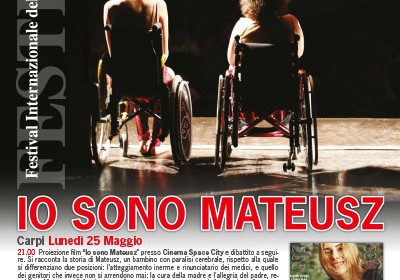 On Monday 25th of May in Capri, in the Cinema Space City at 21.00, will be held the screening of the movie “Life Feels Good” directed by di Maciej Pieprzyca. After the screening there will be a debate about the movie where the Eng.Simone Soria for the social cooperative Aida Onlus and Corrado Azzollini, chairman of Draka Distribution, the Italian production company of the movie.

“Invincible frailty” is the name of the 17th Edition of the International Festival of Different Capability, organised by the social cooperative Nazareno di Carpi (MO) who works with people with physical and mental disabilities and with people with various disabilities. Since ever this cooperative belives that the culture is an important tool of social inclusion.

The palimpsest of the 17th Edition of the International Festival of Different Capability (16 May-20 May in Capri, Correggio, Sorbara and Bologna) aim is to offer the oppotunity to stand against our fragility.

“Life Feels Good” tells the story of a young boy suffering from cerebral paralysis and two differents points of view: on one side the defenceless and outset behavior of the doctors and on the other side the child parents who won’t surrender, the mother cures and the father happiness are the gifts of a worth living childhood even if Mateuz can’t communicate.  After 25 years it will be found out that Mateusz is perfectly mentally healty. Despite the enormous difficulties encountered in trying to communicate with the outside, Mateusz directly experiences the incredible power of willpower and tenacity, finally knocking down the silence.