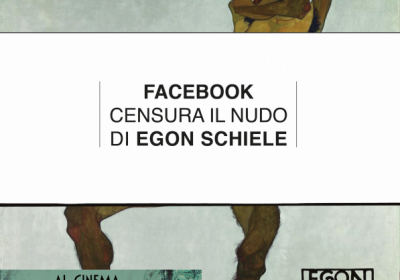 Incredibly Facebook blocks the advertisement that shows a painting by Schiele, despite the nudity were covered. The film “Egon Schiele” which returns to the cinema on 26,27,28 February can not be promoted freely. It is unbelievable that the Viennese Expressionist master, considered pornographic at the beginning of the 20th Century, provokes certain reactions  still today. Indignation grows!

The case of the censorship in London, where the transport company refused to expose the campaign on the events of 2018 linked to Viennese Modernism, because of some Schiele’s paintings included in the campaign, is therefore not an isolated case. The biggest news platform, Facebook, assigns to an algorithm the choice to censor or not the images that circulate on the Social: but that an art masterpiece is censored like any other nude image, it is really incredible.