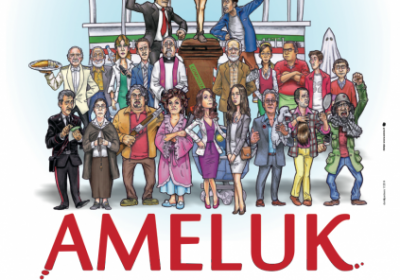 Draka commits to the funny comedy directed by Mimmo Mancini “Ameluk” in cinemas from the 9th od April. The feature film is distribuited by Flavia Entertainment in collaboration with Draka Distribution with the promes to make smile youngs and old ones. The cast is made most of all by actors from Puglia: Mimmo Mancini, Paolo Sassanelli, Dante Marmone, Tiziana Schiavarelli and Teodosio Barresi, Ninni Angiulli, along with important Italian actors like: Roberto Nobile, Cosimo Cinieri, Pascal Zullino, Michele De Virgilio, Claudia Lerro, Nadia Kibout, Hedy Krissane, Mehdi Madhloo, Miloud Mourad Benamara and the friendly coollaboration with Rosanna Banfi. Ameluk is a comedy

“Ameluk- as the director Mimmo Mancini (who is also the scriptwriter along with Carlo Dellonte) states it is a movie with a tone of voce seriously funny.

The focus is the complicated issue of immigration and integration among communities and religions, which inevitably result in racism and prejudice; fortunately,
the meanness and the provincialism of somebody is offset by solidarity and open-mindedness of others.

SYNOPSIS
It’s Good Friday. In Mariotto, a small town in the Apulia region (Southern Italy), everything is ready for the Way of the Cross but the interpreter of Jesus, the hairdresser
Michele, has a sit on the crown of thorns. It is the beginning of the ordeal. The lighting technician, Jusuf, unknowingly sent into the fray by his pastor, replaces Michele in
the role of Christ but he is a Muslim. The news cause a sensational reaction in the town and the public opinion of Mariotto splits in two. Jusuf, nicknamed Ameluk, in spite
of himself, will be candidated for mayor in the local elections. Through dramatic moments and hilarious situations, Ameluk will bring back the peace in the town.