Big Fish & Begonia in the Italian theaters on June 21st 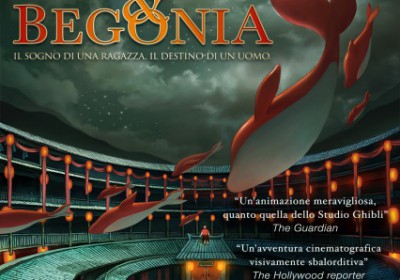 Distributed by Corrado Azzollini for Draka Distribution with Twelve Entertainment Srl, the movie Big Fish & Begonia arrives in the Italian cinemas on June 21st. The movie is a masterpiece of animation that has already enchanted thousands of spectators around the world for the beauty of its images and a story full of emotions.

Twelve years in the making, this Studio Ghibli-inspired animation is the Chinese box office smash of Summer 2016 with over $85,000,000 BO.
Drawing inspiration from classic Chinese literature, BIG FISH & BEGONIA is a beautifully crafted, fantasy animation film that took 12 years to make. It is inspired by Studio Ghibli style story-telling and imagery. BIG FISH & BEGONIA tells the story of a deity, in the form of a young girl (Chun) who seeks adventure in the human world, as a dolphin.
She encounters a human fisherman (Kun) and an unlikely friendship and bond forms between the two putting both of them in great danger.
Gods and humans cannot mix in this ultimate Romeo & Juliet love story from producers B&T Studio and Coloroom Pictures.