Ameluk is finally on rental and sale!

Since 20th October in every dvd shop and digital store. 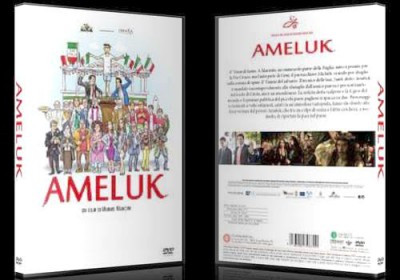 AMELUK will be on sale from 20th of October, the film is directed by Mimmo Mancini, produced by RM consulting and distributed by Draka distribution and Flavia Entertainment. Main topic dealed by the director is the integration and cohabitation between different religions. A Jordanian thirty-years-old man is the main character; he tries to blend in a small town on the Murgia hills near Bari. The main theme of the movie is clear: the rightest way to grow up is to meet each other halfway, in order to leave in peace and learn from each other. But first we have to defeat egoism, fear, ignorance, worry of being fooled by the “different”.

“In Mariotto, a small town of Apulia, is going to take place the traditional Via Crucis of the Good Friday, when the actor who plays Jesus, the hairdresser Michele, sits accidentally down on the thorn crown and gets hurt. Jusuf, light engineer, is convinced by Don Nicola, the priest and his friend, to take Michele’s place as our Lord Jesus Christ. He is unavoidably sent into confusion. He is a muslim that will bring on his shoulders Jesus Christ’s cross, and this shocks everyone. So for Jusuf starts the Calvary. The news spreads around the world and the public opinion in the small apulian town is divided between supporters and critics. On the background, the new major’s electoral campaign. While increasing gags and happenings, the fight becomes more and more heated and tangled up. Jusuf, now named “Ameluk”, joins the political dynamics and becomes, despite himself, the “Messiah” candidate of a colourful and unidentified civic list. In the end, in a colourful atmosphere, full of characters and hilarious moments, sometimes dramatic, Ameluk himself, the “muslim Christ” will bring peace to the town”