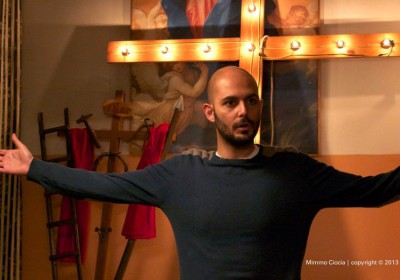 The feature film winner of the Religion Today Filmfestival 2014, will be in the Italian cinemas starting from Thursday 9th of April. The press conference will be held tomorrow at 11:00 at the Cineporto in Bari (180 Pavillion, Fiera del Levante). Will be attending the director Mimmo Mancini (who is also the scriptwriter along with Carlo Dellonte), the actors Dante Marmone, Mehdi Mahdloo, Francesca Giaccari, Nadia Kibout, Andrea Leonetti and Corrado Azzollini from Draka Distribution (the distributor along with Flavia Entertainment)

“Ameluk- as the director states – is a movie against religious and ethnic prejudices. In order to talk about it I used a tone of voce seriously funny where nowdays news are getting along with the parody of the story. The film plot is easy: helping each others is the easiest way of to live and learn something from each others. To win this value we need at first to defide egoism, fear, ingnorance and the fear of the outsider”. The cast is made non only by actors from Puglia like: Mehdi Mahdloo Torkaman, Mimmo Mancini, Claudia Lerro, Francesca Giaccari, Dante Marmone, Roberto Nobile, Cosimo Cinieri, Paolo Sassanelli, Michele Di Virgilio, Maurizio De la Vallée, Andrea Leonetti, Teodosio Barresi, Nadia Kibout, Miloud Mourad Benamara, Luigi Angiuli, Pascal Zullino, Hedy Krissane, Tiziana Schiavarelli, Massimo Bagnasco, Helena Converso, Alberto Testone; and the friendly collaboration with Rosanna Banfi.

Ameluk is produced by Luigi Ricci, Andrea Mattei for RM Consulting and Barbara Sperindei, with a found by the MiBACT Direzione Generale per il Cinema, as Film di interesse Culturale Nazionale and the Apulia Film Commission. The film was shooted in Puglia in the locations of Mariotto, Castel del Monte, the Cathedral in Bitonto and the Cathedral in Trani. The soundtrack is composed by Livio Minafra.