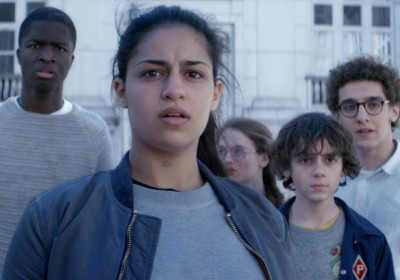 Matteo Vergani, signs the beautiful review on the film Alone by David Moreau, appeared on Nocturno.it, the first fantasy genre digital magazine.  Alone, distributed in Italy by Draka Distribution, is available on the CINEMAF digital platform. “… The creature conceived by the duo Vehlmann-Gazzotti and given birth in a filmic form by David Moreau is not only more than dignified, but extraordinarily engaging, as well as technically flawless from all points of view …”

Read the full review on http://www.nocturno.it/movie/alone/

Alone is exclusively on www.rassegnadigitale.it

Alone is a fantasy-action in which reality will be even more shocking than the terrible fiction in which the young protagonists suddenly awaken.  Inspired by the Franco-Belgian comic Seuls (Alone), written by Fabien Vehlmann and designed by Bruno Gazzotti.

Leïla is 16. She wakes up late, like any other morning. Except that today, no one is here to tell her to get moving. Where are her parents? She gets on her bike and rides through the neighborhood: it’s all empty. Everybody has disappeared. Thinking she’s the sole survivor of an unexplained disaster, she eventually crosses ways with four other teenagers: Dodji, Yvan, Camille and Terry. Together they will try to understand what has happened and to learn to survive in a world that has become hostile… But are they really alone?