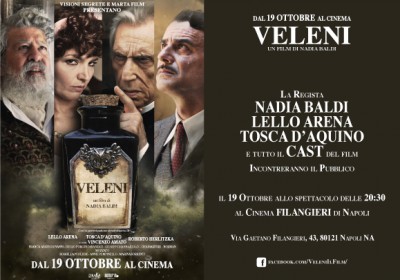 The whole cast will attend this evening at Cinema Filangieri in Naples, for “Veleni” national Premiere.

The movie directed by Nadia Baldi, is in teathers since today. The director will be present together also with Tosca d’Aquino and Lello Arena, symbols of cinema in Naples and main characthers of this noir full of seduction and intrigues, set in Southern Italy in the 1950s, in a village inhabited by women only.

The film is distributed by Draka Distribution.

To learn more about the movie read here.