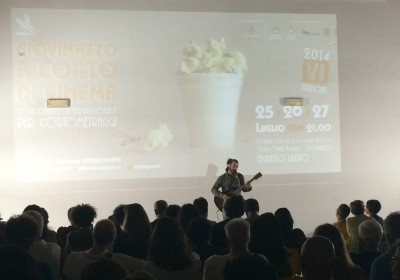 Yesterday night in Giovinazzo the italian artist Peppe Giuffrida performed after the screening of the short-movie “La ricotta e il caffè” produced by Draka Production, directed by Sebastiano Rizzo in the closing night of the event “Giovinazzo a corto di cinema” international exhibition of short-movies.

With his voice and his guitar Giuffrida has played the song “Passa la Banda” official sound-track (composed by Mimmo Cappuccio) of  the short film scrrened and to follow the song “Nomi e Cognomi” from the sound-track of the feature film “Who’s Who” music composed by Valentina Corvino, produced by Draka Production, directed by Sebastiano Rizzo starring Enrico Lo Verso and Maria Grazia Cucinotta.

Today in Molfetta is shooting the videoclip of the song dedicated, as the movie, to the importance of journalism.