Monkey King: the animation movie that seduced all the word, in italian theaters on the 6th of September

Form the adventure that inspired the Dragon Ball saga 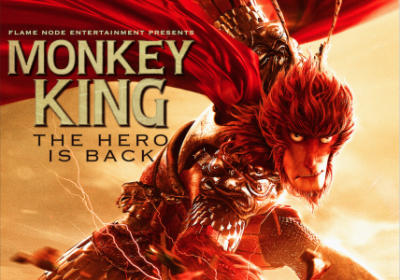 Corrado Azzollini for Draka Distribution presents, in collaboration with Giometti Cinema, a new great Chinese animated film for children and the whole family.  Monkey King – The Hero is Back has been the highest-budget animated film ever produced and distributed in China, with a domestic Box Office of $ 155 million, a success that pushed Sony to create video game of Monkey King for PlayStation and Netflix to distribute the series “The new legends of Monkey”.  Based on the traditional Chinese novel Journey to the West, that inspired also the Dragon Ball saga, the film has been made by 3D technology and shows the spectacular images of the Kung Fu fights, focusing the story on the values ​​of friendship, altruism and courage, typical of the animation movies for children but winking even to teenagers and adults. Strikes, hilarious moments and the unusual  happy ending make it a spectacular and captivating film for everyone.  Directed by Tian Xiao Peng, the film tells the story of the legendary Monkey King who returns, after centuries of imprisonment, to fight against the powers of evil, giving a vision of the hero out of the classical schemes, so much closer to the human weaknesses and limits.  The film has received several international awards including the Golden Rooster Awards at the Silk Road International Film Festival and the Golden Dragon Award at the China Animation & Comic Competition, both as Best Animated Feature Film.

PLOT
The all-powerful Monkey King once roamed freely between Heaven and Earth, but after angering the Gods, he was imprisoned within an ice cage deep within the mountains. 500 years later, monsters attack a small village and a child flees to the mountains. Unknowingly, the child releases the Monkey King from his curse. With the help and encouragement from this special child, Monkey King saves the village from the evil monsters.