The touching adventure drama "Edie", the fantasy "The Stronghold", the comedy "All'Alba perderò" (I shall lose at dawn) 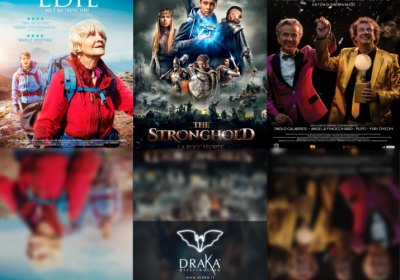 Protect the past for the sake of the future!
A solar eclipse activates a magic time portal and a regular schoolboy Victor, from the 21st century goes a thousand years back in time. It doesn’t take long to recognize the legendary bogatyrs in young Alyoshka, powerful Ilya and severe Dobrynya. Their life passes in fighting Cumans who try to destroy Rusichi at any cost, using both weapons and black magic. Vitya (Vitcor) finds himself in the very midst of incredible events, battles with mythical creatures and acquires real courage.

“EDIE” by Simon Hunter
starring Sheila Hancock, Kevin Guthrie, Paul Brannigan, Amy Manson, Wendy Morgan
ORA SU CG DIGITAL
and since 21 June also on Prime Video Store, iTunes, Apple Tv, Google Play, Chili, Rakuten Tv
Edith Moore (Edie) is a bitter, gruff woman in her eighties. In the months following her husband George’s death, Edie’s strained relationship with her daughter Nancy begins to worsen. The question over Edie’s future looms large; while Edie tries hard to convince Nancy she can manage fine by herself, Nancy is making plans for her mother to move to a retirement home. Edie feels like it is the beginning of the end. It seems she will die with all the regrets of her past intact and one regret haunts her most of all. When Edie was married, her father planned a climbing trip for them in the Scottish Highlands. Edie yearned to go, but her husband George, a difficult and controlling man, made her stay at home, nearly thirty years later, Edie decides to make the trip herself alone.
“ALL’ALBA PERDERO’” by Andrea Muzzi
starring Andrea Muzzi, Miriam Bardini, Daniele Marmi, Michele Crestacci, Alessandro Riccio e the special participation of Paolo Calabresi, Angela Finocchiaro, Pupo Ghinazzi
ORA SU CG DIGITAL
e on Prime Video Store, iTunes, Apple Tv, Google Play, Chili, Rakuten Tv

Andrea Gregoretti is a fifty-year-old director and screenwriter who has been trying for years to shoot his new film. None of the many written stories have got any interest by producers and the repeated failures cause Gregoretti to fall into a depressive state. One day a childhood memory emerges, linked to a school friend who in the fifth grade, during the dictation, managed to make 24 mistakes in one word. The memory of this “champion” of grammar stimulates Gregoretti’s enthusiasm for a new project, destined, maybe, to finally become a film. The idea is to tell the deeds of the heroes of defeat. Thus began a long search that led him to come across several champions of failure: people who lost dramatically but in a unique way. Gradually Gregoretti brings to light unknown and incredible stories. Will Gregoretti be able to make his new film? He will certainly understand how failure can be more educational than victory.