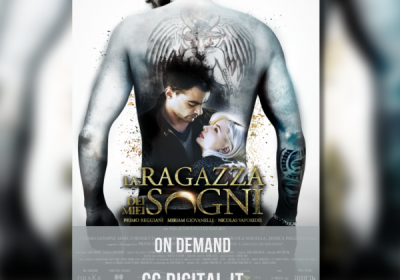 “La Ragazza dei miei Sogni” (The girl of my dreams) by Saverio Di Biagio is now available On Demand on CG DIGITAL and on the main platforms.

The urban-fantasy is based on the novel by Francesco Dimitri, writer of many fantasy books and considered “one of the most significant writers of non-fiction and fantasy novels in the current generation”.
Directed by Saverio Di Biagio. Starring Primo Reggiani, Miriam Giovanelli, Nicolas Vaporidis, Chiara Gensini, Marco Rossetti and with Remo Girone, with the participation of  Nicola Nocella and Jessica Paglialunga.
P. is a thirty-years-old guy, quite unsatisfied. Several situations have been badly influencing him, preventing him from living how he would like to: parents’ death, the aseptic newsroom where he works; Mario, his roommate, such breezy as superficial; Margherita, the girl he loves and which he can’t declare himself to. One day at the office P. meets an old high school friend, Alessandro, brilliant IT consultant day-time and unleashed electronic musician at night; Alessandro brings P. in a world of fantasy and secrecy. “The enchantment is everywhere, along the streets, in the crowd, you just have to learn to see”, says Alessandro, while he’s leading P. through the discovery of an hidden world that slithers eternally behind the reality we use to know.

When P. meets Sofia, fascinating and tender, so similar to the girl he dreams every night, an irrepressible passion turns them on. P. will find out gradually a world he couldn’t guess before and the events will force him to a great sacrifice to survive, changing completely his point of view about life and love.