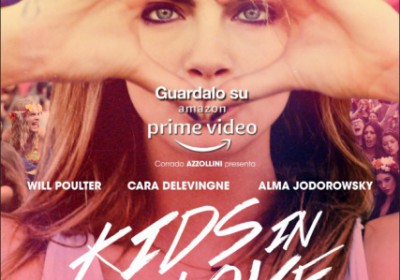 By the producers of St Trinian’s, Kids in love has been selected as Best British Film at the Edinburgh International Film Festival and it is at the moment among the suggested titles on the Amazon Prime Video platform.

“Kids in love” tells the story of Jack (Poulter), who is waiting to start his gap year before college and is almost ready to devote himself to a trip and an internship carefully organized by his old friend Tom (Jamie Blackley) and his parents, who dream of a brilliant career for him. But, deep down, the boy feels that in life there is much more than what his father thinks is right for him. His desire to live new experiences will lead him into a never known bohemian London, seductive and exciting. The unexpected encounter with the beautiful and ethereal Evelyn (Jodorowsky) and her friends, including the free spirit Viola (Delevingne), will take him radically off course. Evelyn is the girl he has never met before and the new experiences will push him to revise his plans, up to the conflict with his family and Tom, from which he will suddenly feel bored and oppressed. In the end, going astray can be a way to know better yourself and to find the right direction to get; choosing what to do with your life is the challenge that each of us must face sooner or later.

“The audience is hungry for stories they can identify with, which is why “Kids in love “has an important value right now, especially for young people” – says Foggin – “I am a director who has always been interested in bringing true stories to the screen. and this film gave me the opportunity to explore a slice of our time, with all its humor, its extravagances, temptations and risks. I wanted to tell the complexity of human relationships, highlighting their bizarre and uncertainties, mixing coarse laughter with moving moments of authentic drama … I would like the audience to travel with our characters, in search of love and their own path. Kids in love is a coming-of-age film that we can all refer to, because we have all been through it … a contemporary story about love and relationships among young people “.