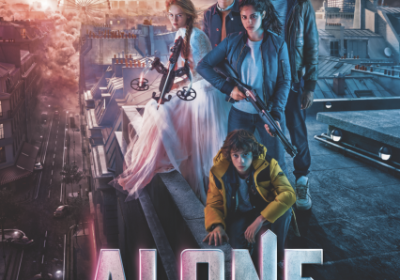 Draka Distribution presents, in exclusive premiere on Amazon Prime Video, the cinecomic “Alone”, a fantasy action movie in which the reality will be even more shocking than the terrible fiction in which the young protagonists suddenly wake up.

Inspired by the Franco-Belgian comic Seuls (Soli), written by Fabien Vehlmann and drawn by Bruno Gazzotti, Alone tells of Leila (Sofia Lesaffre) a sixteen years old girl, not very sociable and unable to integrate at school.

She is very fond of cars, like his brother, a racing driver, in a coma after an accident during a race. After another quarrel at school, Leila decides to go to the rides to clear her mind; unbeknownst to the girl, something will happen in that place that will completely change her life. Leila will find out the morning after. She wakes up late, as usual, but there is something strange. There is no one waiting for her and rushing her to run to school. Where are her parents? Riding her bicycle she crosses the empty neighborhood. There is no one around. She begins to think that she is the only survivor of an inexplicable disaster when she finally meets four other guys: Dodji, Yvan, Camille and Terry. As a dense fog gradually spreads over the city, the kids will try to understand what happened, learning to survive. But are they really alone?

Directed by David Moreau (The eye with Jessica Alba), Alone is a French adventure film that addresses the issues of integration and social exclusion, relationship and family difficulties, the mystery of death, seen through the eyes of a group of teenagers, who will find themselves catapulted from their everyday life into an unknown world with only two weapons to survive: courage and friendship. In the cast, with Sofia Lesaffre (I miserabili), Stéphane Bak (Elle), Jean-Stan Du Pac (the mini TV series Malaterra) and Paul Scarfoglio (A bag of marbles).

Link to the trailer: https://youtu.be/ko7Ia5ed7uY