The titles by Draka Distribution, in the new art section on Amazon Prime Video Italia

"For the art lovers" 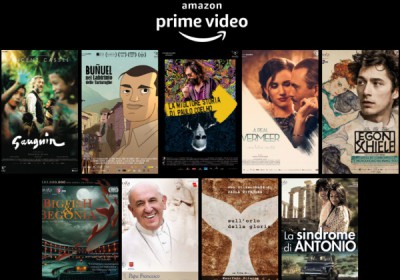 Nine titles by Draka Distribution about art, now all featured in the new Amazon Prime Video Italia section dedicated “to art lovers”: “Gauguin” by Edouard Deluc, with a wonderful Vincent Cassel; “Big Fish & Begonia” by Liang Xuan and Chun Zang, the masterpiece animated film compared to the great productions by Studio Ghibli; “Buñuel in the labyrinth of turtles“, winner at the  European Film Awards as Best Animated Film; “Egon Schiele” on the master of Viennese Expressionism; Rudolf van den Berg’s “A Real Vermeer“, the story of the greatest art forger of all time; “Paulo Coelho best story “ by Daniel Augusto, the untold story of the young man who would become one of the most popular authors in the world; “Sull’orlo della Gloria” the documentary by Maurizio Sciarra dedicated to the artist Pino Pascali; “The Antonio syndrome” the journey of a young man in the 1968 along the Greece and the myth and of Plato and “Pope Francis. My idea of ​​art” on the Pope Francis’ ideal art gallery, both directed by Claudio Rossi Massimi.