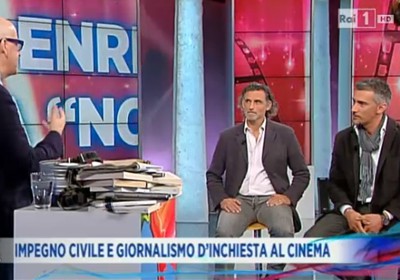 Enrico Lo Verso and Sebastiano Rizzo guests at the TV program IL CAFFE’ DI RAI UNO, the lead actor and the director of the short-movie “Who’s Who” produced by Corrado Azzollini’s Draka Production for the award winning prize Agave di Cristallo “Winning as film with the best dialogues” (also directed by Sebastiano Rizzo and produced by Draka Production. The short-movie will win the award on the 21 and 22 of the current month. The short-movie inspired the feature film “Who’s Who” so it offers a preview occation on the feature film coming out in the 2015.