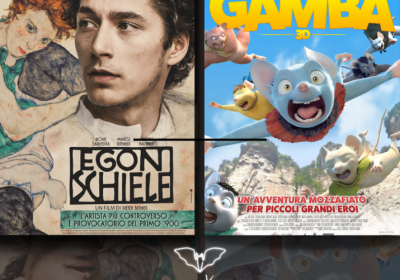 The film about the genius Egon Schiele, controversial and provocative artist, master of Austrian Expressionism.

At the beginning of the 20th Century, Egon Schiele is among the most provocative and controversial artists in Vienna. His art is inspired by beautiful women and an era that is drawing to a close. Two women in particular will really affect his life and his artistic expression: his sister and his first muse, Gerti and the seventeen-year-old Wally, probably Schiele’s only true love, immortalized in his famous painting “Death and the Maiden”. As Schiele’s paintings create scandal in Vienna society, far-sighted collectors and already acclaimed artists such as Gustav Klimt, begin to recognize the exceptional value of the young man’s provocative and tormented art. Schiele will choose to dive into the pain of his existential discomfort, making it his stylistic signature and sacrificing love and life itself to his art.

“GAMBA” by Yohichi Ogawa, Tomohiro Kawamura and Yoshihiro Komori
FROM 10 MAY ON CG DIGITAL

Gamba is a mouse who lives in the city and decides to take a trip to the sea. Along the way he meets Chuta, seeking help to protect his country village from the assault of a fierce and slimy band of weasels, led by the terrible Noroi. Gamba will decide to help his new friend but will have to learn to fight in a real team, for the common salvation against the evil enemies.
Based on the successful Japanese animated series of 1975, directed by the great Dezaki Osamu and based on the book by Saito Atsuo.