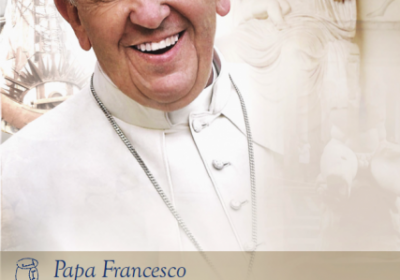 ”God does not know our culture of waste. God does not discard any person, God loves everyone” states Pope Francis in the documentary My Idea of Art explaining his passionate idea of Art as instrument of evangelization and upgrading of the scrap

Produced by the Vatican Museums and distributed by Corrado Azzollini and Giulio Violati for Draka Distribution, directed by Claudio Rossi Massimi, My Idea of Art will lead the viewer along the ideal art gallery of the pontiff.

Pope Francis suggests a series of artworks to describe his idea of Art and art works symbols of Mercy the Belvedere Torso, La dea che allatta un bambino, Il buon pastore, St. Peter Obelisk, San Pietro in Cattedra, The Works of Mercy, The Deposition by Caravaggio, the Sistine Chapel, the Christ the Worker and The Virgen de Luján both by Alejandro Marmo and as well the Renault 4 donated to the Pontiff by Don Renzo Zocca from Verona.  Pope Francis stated: “The Vatican Museums have to be the most beautiful place and the most hospitable. It must throw open its doors to the world. They must be an instrument of dialogue between cultures and religions, a tool of peace, not a dusty collections of the past only for the “elect” and the “wise” but a vital reality that can keep that past telling it to men today, beginning with the humble ones”.

Tiziana Lupi, screenwriter of the documentary and Sandro Barbagallo, curator of the Historical Collection of the Museums in the documentary will explain the artistic aspects of the artworks.
The documentary is based on the book of the same name (ed. Mondadori – Musei Vaticani, edited by Tiziana Lupi) in which, for the first time, Pope Fancis explained his idea of art and its social valence, aimed to recovery the dignity of the marginalized people of the suburb, peripheries of the world, not only from a geographic point but also from an existential ones.