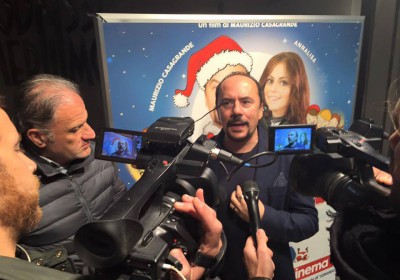 SCREENING FOR THE PRESS

Marcello (Maurizio Casagrande) old-fashioned illusionist, immature, superficial, liar father with His daugther India (Annalisa), a talented singer but with a look too similar to the famous singer Annalisa, with who she is often double of Annalisa. To solve her difficult situation with men she decides to spend the Christmas Holidays with her father, who is leaving to instead Salerno, leaving her alone at home. He needs to deliver the Christmas presents dressed like Santa, while he is doing it, he falls down, hits His head and looses His memory. Father Thomas (Gianpaolo Morelli) reaches him for help along with the childrens who are living with him. Marcello does not remember anything about him so they call him Santa Claus. But in the meantime, India, disappointed and angry, starts to search for her dad, (gets on tracks), along with Gerardo (Angelo Orlando), Marcello’s slob and incapable manager. In between many misunderstandings and ups and downs, after defeating the evil impersonating by the beautiful and evil Alice (Tiziana De Giacomo) they will find a lot more than the instructions themselves.