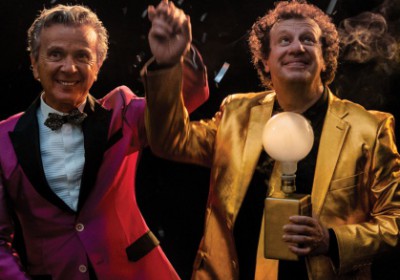 The hilarious comedy “All’alba perderò” (I shall lose at dawn) by Andrea Muzzi is now available on Amazon Prime Video.

A very enjoyable film that celebrates failure as experience so common in all of us life and also to the great protagonists of history.

Andrea Gregoretti is a fifty-year-old director-screenwriter who has been trying for years to shoot his new film. But of the many stories, none of them got the interest of producers. Repeated failures cause Gregoretti to fall into a depressive state, during which he even dreams of winning an Oscar in the popular “Failure of the year” category. One day, in Gregoretti’s mind a childhood memory emerges, linked to a school friend who in the fifth grade, during the dictation, managed to make 24 mistakes in one word. The memory of this “champion” of grammar stimulates Gregoretti’s enthusiasm for a new project, destined to finally become a film. The idea is to tell the deeds of the heroes of defeat. Thus began a long search that led him to come across numerous champions of failure, from the world of sport to literature and art: men who lost dramatically but in a unique way. Gradually Gregoretti brings to light unknown and incredible stories. Will Gregoretti be able to make his new film? He will certainly understand how failure can be more educational than victory.