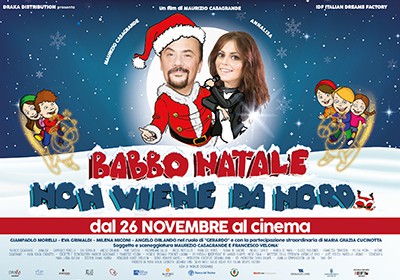 Draka Distribution is proud to present to IDF Italian Dreams Factory a feature film directed by Maurizio Casagrande. The histrionic parthenopean artist is back to direct a dreamy Christmas movie. On his side for the first time on-screen Annalisa, one of the most successful artist tagged Amici di Maria De Filippi. Annalisa is famous singer and in the last three years she was in the worldwide charts with three platinum records, the success during the Sanermo Music Festival and the award winning at the Wind Music Awards. The cast is composed by: Giampaolo Morelli, Milena Miconi, Eva Grimaldi , Angelo Orlando, Nino Frassica, Massimiliano Gallo, Rocco Mortelliti, Maria del Monte, Tiziana de Giacomo, Michele Caputo, Andrea De Maria, Chicco Paglionico, Francesca Tomassoni, Antonio Casagrande and the special guest star appearance of Maria Grazia Cucinotta. The story looks-like a fairytale set on the backdrop of the magic “Lights of Artist” in Salerno that follows the life paths of the characters. Casagrande is a superficial and liar father, who during the Christmas Day after hundred of misunderstandings and ups and downs, will try to recover his relationship with his daughter India, a talented but unsuccessful singer. The film producted by Giovanna Emidi, Silvia Natili and Maria Grazia Cucinotta from Italian Dreams Factory. Maria Grazia Cucinotta is playing the small-role of a psicologist. The movie is cooming soon.