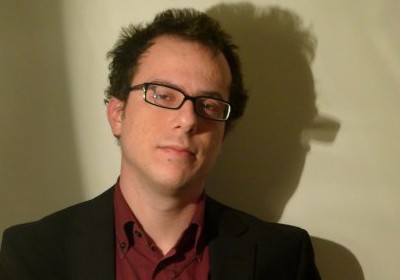 Francesco Dimitri has just arrived to Bari from London (where he has lived and worked for years) to follow the filming of “La ragazza dei miei sogni” (The girl of my dreams) born from his fervid imagination. He gave us a short interview because the movie is a work in progress in Apulia during these weeks.

The movie is taken from the homonymous fantasy book, written by Dimitri (he is also the author and the coauthor of the subject of the screenwriting with Saverio Di Biagio, the director) and he is considered, by critics and audience, to be one of the most interesting italian fantasy authors in the contemporary literary landscape.

What do you expect from this movie?

I think it will definitely be a good movie but, mostly, I expect it to be a story capable of giving something to the audience. The good stories are capable of bringing yourself in another dimension, a kind of fairy world of which, in the end, a piece remains forever in the soul.

How did your audience react to the news that the novel “La ragazza dei miei sogni” (The girl of my dreams) will become a movie ?

In reality, many readers were waiting for it and were very happy with the news because it is a story that can really speak to everyone, helping to overcome a false and obsolete idea according to the existence of types of literature, male and female. A sexsist theory that doesn’t have a foundation.

Is there another work that you and your readers would like to see translated into a film ?

Of course! Some people are waiting for “Pan” and for me it would be great but I realize that it is a really busy production, not only in terms of investment. Producing “Pan” would mean producing a blockbuster. Anyway, even my latest novel “L’età sottile” (The age thin), has a structure very cinematic structure.

You are the author of fantasy books in which the “magic” occupies a huge space and is not an exception “La ragazza dei miei sogni” (The girl of my dreams). Why is this interest so strong?

I’ve always been passionate about magic, but magic not as a simple fashion new age, but something much deeper and more complex. Basically, I consider it an form of art, such as literature and poetry and how these can tell us something about how we really function. If we think about it, the universe itself is magical.

What do you think about fantasy movies especially in Italy?

I have loved fantasy since I was a child, when the audience was very restricted. Today things have changed a lot and an example of this trasformation is given by the great success of Lucca Comix. So now, the audience exsists, but the productions are not many. At the end, it should be noted that there is still a strong passion for foreign things; a natural phenomenon as much generation was formed on foreign productions, most notably, the Anglo-Saxon production.

What are you working on now?

I’m working on a new novel focused on a very unique cowboy story. In reality, it is an idea born a very long time ago, which I finally started working on. I almost always produce the seed of a new project, but then, before I realize it, I spend years and this is because it is not easy to find the right path to a story. A story is not so much an invention. It is an assiduous research of its natural course, because there are so many ways to take it forward, considering that every story can work in only one way. The game is in the catch of this aspect.

How was the collaboration with Corrado Azzollini and Draka born?

By accident, thanks to my brother who previously collaborated with Draka; but has exceeded expectation. I have worked with many people in my career and I must to say that I recognize Draka as one of the most serious and pleasing productions with I have worked on. I want to emphasize that it takes courage to produce a story like this. Draka has shown great courage that deserves admiration.