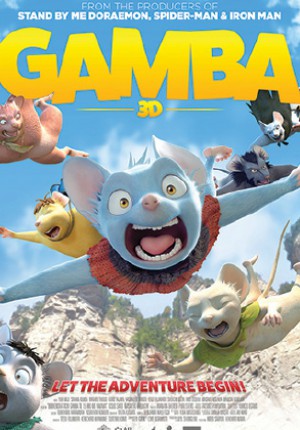 The film refiles the Japanese animation series which had already great success in 1975, directed by the great Dezaki Osamu and based on Saito Atsuo’s book. The classic values of the animation films return: journey, adventure, meeting new friends, solidarity, the courage to help others, even at the cost of making heavy sacrifices, the world of animals. Everything is told with the funny and charming comedy of a cartoon with a really high artistic quality, with in plus, the executive production of Avi Arad, Marvel Studios’ founder, ex-president of Marvel Entertainment.

Gamba, that porposes again the Japanese animated hit series of 1975, directed by the great Osamu Dezaki and based on the book by Atsuo Saito (serial broadcasted even in Italy) is an adventure film that will captivate kids but also cartoon lovers of all ages.

Gamba is a little mouse who lives in town and decides to start a journey to the sea. Along the way he meets Chuta, looking for help to defend his country village from an assault of a menacing and slimy gang of weasels, leaded by the mean Noroi. Gamba will decide to help his new friend but he will have to learn how to fight in a real team, for the safeness of everyone against the cunning enemies.