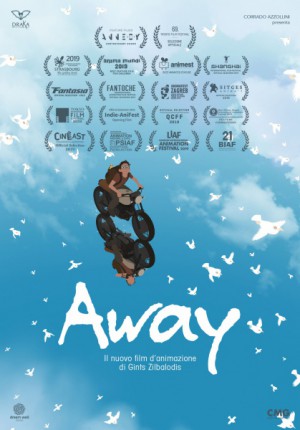 The story is about a boy traveling across an island on a motorcycle, trying to escape a dark spirit and get back home.

A labor of love, AWAY, is an amazing feature length animated film; written, produced, directed, and composed entirely by one very talented person: Director and Animator, Gints Zilbalodis. Gints worked on the film for three and a half years, handling all aspects of production including writing, designing, animating, post-production and composing the musical score. Told in four chapters, the young boy travels across a mysterious land, crossing barren deserts and beautiful forests, all the while being pursued by a relentless dark spirit. Along the way he makes a series of connections with different animals and reflects on the possible ways he ended up on the island. Part dream, part reality, and in a way, the storyline is a reflection of the creative process of the making of the film itself. The main idea of AWAY is our common, universal need to find a connection. Filled with stunning visuals, Zilbalodis’ images speak for themselves in this dialogue-free film. This is Zilbalodis first full-length feature film production, after having already produced and directed seven animated shorts including Priorities, Aqua, and Oasis.