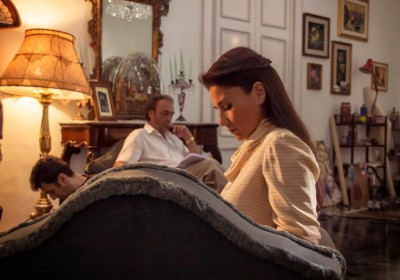 The short-movie produced by Corrado Azzollini’s Draka Production and directed by Sebastiano Rizzo, starring Luca Ward and Barbara Tabita will premiere out of competition to the exhibition of short-movies “ A corto di Cinema” on Sunday 27 of this month, in the school San Giovanni Bosco court – Corso Dante Alighieri – Giovinazzo, Bari.

It’s with a great pleasure for the production and Amra Communication Solution – Draka’s media partner- to announce the screening of the feature film fully shouted in Giovinazzo along with many citizen who collaborated to the film (extras, help to the crew, locations, etc.).

During the night there will be Peppe Giuffrida who will live play two songs: “Passa la Banda” official sound-track (composed by Mimmo Cappuccio) of the short film screened and to follow the song “Nomi e Cognomi” from the sound-track of the feature film “Who’s Who” music composed by Valentina Corvino, produced by Draka Production, directed by Sebastiano Rizzo starring Enrico Lo Verso and Maria Grazia Cucinotta.

Giuffrida is produced by Draka Production discography, he is author for many important Italian artists and he is now working for his new album.