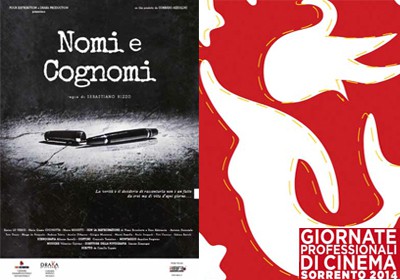 The film, produced by Corrado Azzollini for Draka Production, directed by Sebastiano Rizzo and written by Camilla Cuparo, will be showed as a preview at the Sorrento’s Giornate Professionali del Cinema (Cinema professional Days, dedicated to cinema operators).

The presentation will be taken on Tuesday 2nd December 2014,  by Four Distribution and Draka Production.

The producer, the director and the main actors Enrico Lo Verso, Maria Grazia Cucinotta and Mingo De Pasquale, will take part to the event.

The Sorrento’s Days  (1-4 December 2014) is produced and organised by Anec, national partnership film operators , in cooperation with Anem’s operators and Anica’s distributors, aimed to present the coming movies (planned for releasing on 2015) to the film operators; it is about an important showcase.

Nomi e Cognomi (Who’s Who) – that includes inthe cast also Marco Rossetti, Antonio Stornaiolo, Totò Onnis, Dino Abbrescia, Ninni Bruschetta and Barbara Tabita-  is a film aimed to young people, focused on the team values, on the importance of having a goal to persue with tenacity and enthusiasm.

It is about the man’s life, a journalist with an unwavering professional ethics, moved by a deep desire to find the truth as a life’s requirement.

Nomi e Cognomi is a moral imperative, a guide of thinking and doing something, believing in some principles and refusing the others.