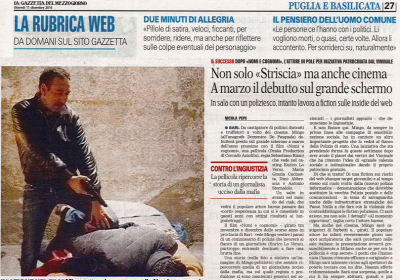 Mingo De Pasquale, the famous journalist of “Striscia la notizia” tells about his starring role in “Who’s Who” directed by Sebastiano Rizzo and produced by Corrado Azzollini’s Draka Production, theatrically released in March 2015.

This confirms that cine-career of the famous TVs journalist who already worked in few short-movies.

The character played in “Who’s Who” has a positive personality coherent with Mingo’s image from the satirical TV program, confirmed by the commitment to social campaigns.

The actor states as well that he has more works-in progress on the same social themes like a fiction in collaboration with the Italian State Police; an Anti-piracy spot will be soon in the Italian Cinemas.