Press Conference to present the feature film “ Who’s Who” 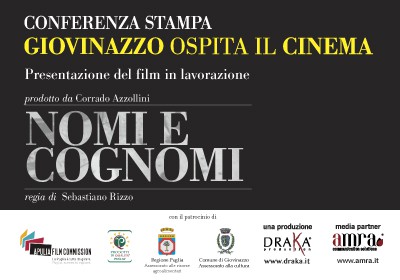 Scheduled for tomorrow the press conference in Giovinazzo for the feature film “Who’s Who” (shooting until the 21st of December) directed by Sebastiano Rizzo and produced by Corrado Azzollini’s Draka Production.

It will be an occasion to present in detail the artistic content of the feature film with the cast and the director.

The producer Corrado Azzollini and the Apulia Film Commission chairman will introduce some economical aspect regarding the production and the cultural value of this film on national stage. The mayor of Giovinazzo Tommaso Depalma and the councillor of Agriculture of the Region Puglia Fabrizio Nardoni will also participate to the debate. Is important in such a dark economical period the sponsorship of many external investors and the commitment of Amra Communication Solutions as media partner to reach the needed budget.

Such an important cast also honours the film.