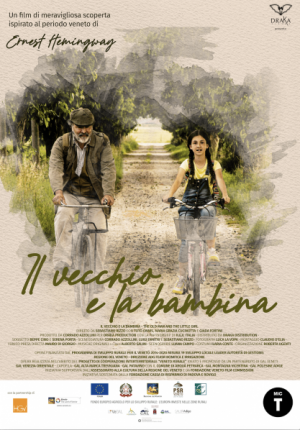 biopic, art, history, on the road

Shot in the splendid locations of the Veneto region, the film retraces the places which Ernest Hemingway visited and where he spent a part of his life, from the Great War onwards. The figure of the great author is evoked by the encounters, by the places, by the memories and by the figure of the old man himself, accompanied by his niece on his mysterious journey.

“It is by riding a bicycle that you learn the contours of a country best” Ernest Hemingway
A man’s solitary journey becomes the experience of wonderful discovery of a grandfather together with his granddaughter. Immersed in the intimate evocation of Ernest Hemingway, the old man takes the little girl into the historical memory of their land, where the great writer lived. Riding their bicycles and recalling a past of timeless art and culture, the two will reach the most beautiful destination: where to start again.

The film is produced by Corrado Azzollini for Draka Production with the partnership of HGV Italia, as part of the “rural Veneto” inter-territorial cooperation project conceived and promoted by a partner of Veneto GAL: VeGAL – lead partner, GAL Alta Marca Trevigiana, GAL Patavino with the Municipality of Arquà Petrarca, GAL Montagna Vicentina and GAL Adige, with the funding of Measure 19 – Local Development Leader of the 2014-2020 RDP of the Veneto Region, (Agriculture and Tourism Departments), Cassa Di Risparmio Di Padova E Rovigo Foundation and the Cariparo Foundation. The initiative is supported by the Department of Culture of the Veneto Region and the Veneto Film Commission Foundation.