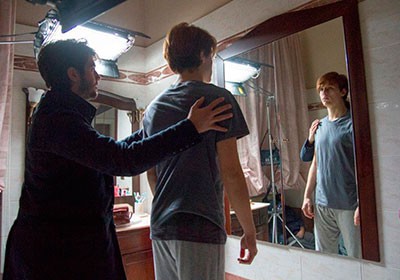 The short movie “Dimmi cosa senti” shot last December in Giovinazzo and Corato is in the editing phase. The short movie is directed by the young Paolo Strippoli and produced by Corrado Azzollini’s Draka Production.

The short movie tells the story of how a little town reacts to the suicide of a 15 years old guy named Claudo, played by Nicolò Battista. In the short movie starred Adriano played by Alberto Rubini – father of the famous director Sergio Rubini and Pietro played by Andrea Simonetti, emerging director and actor.

Paolo Strippoli studies in the department of “Art and Science of Shows” at the University “La Sapienza” in Rome. He worked in “La ricotta e il caffè” (2012) directed by Sebastiano Rizzo, produced by Draka Production, he decided to work as an actor to understand how to direct a movie himself. In the 2011 he graduate from the acting school “Francesco Martinelli’ School of Art and Communication”. In the 2011 he directs his first short-film “Conflitto” co-directing it with Silvia D’Oria, winning as best short-film in the category my-giffoni in the Giffoni Film Festival 2012; in the 2012 his short-film “Un Mondo Violento” was premiered at the “Festival del Cinema Europeo di Lecce”