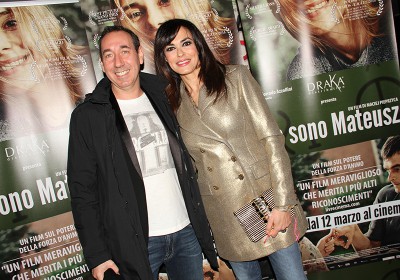 After the great success at the Adriano in Rome, during the Bari screening the cinema was “sold out” for the feature film “Life feels Good” distribuited by Corrado Azzollini’s Draka Distribution. “Life Feels Good” tells the story of a young boy suffering from cerebral paralysis and two different points of view: on one side the defenceless and outset behaviour of the doctors and on the other side the child parents who won’t surrender, the mother cures and the father happiness are the gifts of a worth living childhood even if Mateusz can’t communicate.

Twentyfive years must pass before someone will notice that there is intelligence trap in an untamed body. This someone will finally offer to Mateusz the tools to tell who he is and who he has always been. The film is distribuited by Corrado Azzollini’s Draka Distribution; Maciej Pieprzyca is the scriptwriter and the director, and it starring the actor Dawid Ogrodnik (one of the lead actors of “Ida”, Oscar Winner, Best foreign Feature 2015). To the premiere, held in the Cinema Show Ville (at 20:30); will attend as guest stars Maria Grazia Cucinotta and Mingo De Pasquale, who decided to be the official film testimonials because of the social important issues, its realism, love, and touching soul.

“Life feels Good” is a total masterpiece of the contemporary cinema. For the same reasons the association Mano a Mano in Bari and the Azione Cattolica (District in Molfetta, Ruvo, Giovinazzo, Terlizzi) decided to promote the feature film on the territory. Some of the takings from the box office will be a charity donation.

It is the amazing story of Mateusz, suffering from cerebral paralysis, diagnosed as mental retardation, then insurmountable obstacle for the child’s communication with the world outside. After 25 years it will be found out that Mateusz is perfectly mentally healthy.