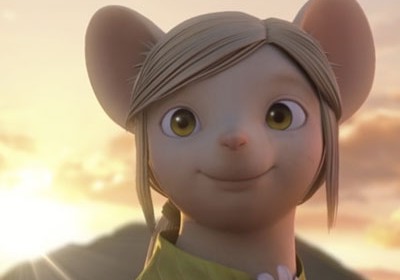 The adventurous little mouse from the Japanese animation series which had already great success in the 70′s is back in a new totally re-styled version available also in 3D. During the last European Market in Berlin Draka Distribution started the negotiations on the acquisition of the brand-new Japanese cartoon Gamba. The negotiation has nearly closed and the funny cartoon will be distibute in Italy probably in the beginning of the new year. With an over 20 million dollars budget and a top class creative team (the animation studio Shirogumi CG, which he has already created many other new films like The Eternal Zero e Doraemon the movie (one of the best computer-graphic animation movie project realized in Japan). Gamba has also been produced by Avi Arad founder of the Marvel Studios and former chairman of Marvel Entertainment (who has a leading role in the international cinema as he worked in many successful projects as Iron-Man, Spider-man ans the X-Men).

The film refiles the Japanese animation series which had already great success in 1975, directed by the great Dezaki Osamu and based on Saito Atsuo’s book (series also screened in Italy). It’s an adventure movie that both kids and grown up will enjoy.

Gamba is a little mouse who lives in town and decides to start a journey to the sea. Along the way he meets Chuta, looking for help to defend his country village from an assault of a menacing and slimy gang of weasels, leaded by the mean Noroi.

Gamba will decide to help his new friend and and a crazy adventure will begin against a fatal outcome almost certain; Gamba will have to learn to fight in a real team, for the safeness of everyone against the cunning enemies and in the end, the mice will succeed in their harrows ordeal.