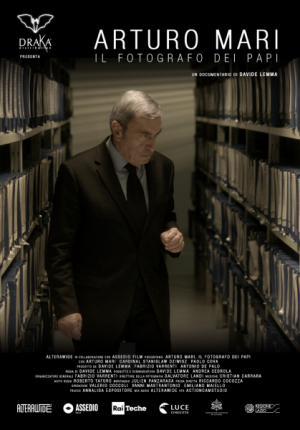 Arturo Mari – The photographer of the Popes

The documentary revolves around the story of a man and a professional who is out of the ordinary, a photographer who is rightfully placed among the greatest testimonies of the 1900’s.

Arturo Mari was an active part of the Papacy from the middle of the last century up until the first decade of the current century, placing his camera lens at the service of five Popes: Pius XII, John Paul XXIII, Paul VI, John Paul I, John Paul II and Benedict XVI.

His photos allowed the entire world to view private and public moments of the above mentioned Popes, composing a grand narration through images for the Catholic Church.  The documentary is directed towards a diversified audience because it narrates not only the biography and profession of the photographer but also his journey from a social, historical, and cultural point of view.

Arturo Mari can in fact be considered the point of arrival of the Papal portrait age-old tradition. His photos are “heirs on film” of the great paintings of the past, and for this reason they are analyzed by an art historian in relation to the work of famous artists who have ventured in this type of field. Hand-in-hand with the Church changes, the work of Mari humanized the Popes’ image and the documentary narrates this path of his: in fact, besides the historical narrations, it mostly speaks of human beings, of a love for the Church and for one’s job, of the day to day life of those who live in the spotlight of History, of great challenges and profound friendships.

Such as the friendship between Arturo Mari and Karol Woytila, whom the photographer considered a Saint as well as an older brother, bonding with him on a visceral level, always by his side during his most important moments, from the attempted assassination attack to his long trips, and from the hours spent at the Vatican to the heart-breaking death of the Pope. It is exactly at this point that the narrative is interrupted, at the moment in which the two friends say goodbye; a giant in History and an artist who narrated his deeds.

A relationship that effectively synthesizes the two narrative lines of the documentary, very intertwined amongst themselves: the life of a great photographer and the last 50 years of history of the Catholic Church.