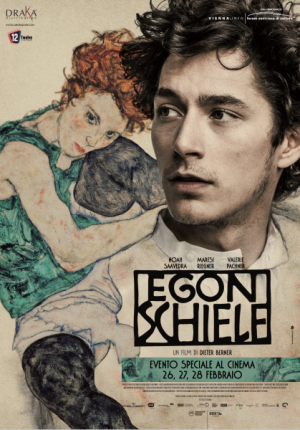 Draka Distribution, in collaboration with Twelve Entertainment, presents the film about the genius Egon Schiele, controversial and provocative artist, master of Austrian Expressionism.

At the beginning of the 20th Century Egon Schiele is one of the most provocative artists in Vienna. His life and work are driven by beautiful women and an era that is coming to an end. Two women will have a lasting impact on him – his sister and first muse Gerti, and 17 year old Wally, arguably Schiele’s one true love, immortalised in his famous painting ‘Death and the Maiden’. Schiele’s radical paintings scandalise Viennese society while daring artists like Gustav Klimt and art agents alike are sensing the exceptional. But Egon Schiele is also prepared to go beyond his own pain and to sacrifice Love and Life for his Art. Art that inspires us up to this day.