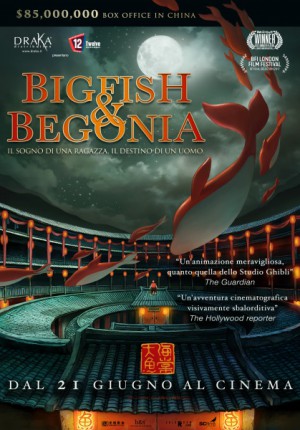 Available in dvd/bluray, on Amazon Prime Video and on demand

Twelve years in the making, this  Studio Ghibli-inspired animation is the Chinese box office smash of Summer 2016 with over $85,000,000 BO.

Drawing inspiration from classic Chinese literature, BIG FISH & BEGONIA is a beautifully crafted, fantasy animation film that took 12 years to make. It is inspired by Studio Ghibli style story-telling and imagery. BIG FISH & BEGONIA tells the story of a deity, in the form of a young girl (Chun) who seeks adventure in the human world, as a dolphin.

She encounters a human fisherman (Kun) and an unlikely friendship and bond forms between the two putting both of them in great danger.