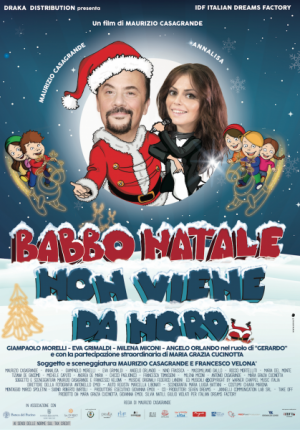 Available on dvd and on Amazon Prime Video

Enjoy this Christmas fairytale; to laugh together even at those sensitive themes that here are faced with the soft, masterful touch of who are able to speak to both children and adults.

In an enchanted garden, with many flashing lights, a Santa Claus calls the attention of a little girl walking with her mommy. The girl cries at his sight, so the “old man” picks her up and tells her a story…
Marcello is a skillful but old-fashioned illusionist, immature, superficial, some kind of Peter Pan who never assumes any responsibility, eternally in love with women. He has a daughter, India, whom he has never taken care of.
India is now 27 years old and she decides to go stay at his father’s, in order to have some more chance for her career. The girl is a talented but unsuccessful singer; double of Annalisa Scarrone (really famous italian songwriter), she can’t emerge by affirming her artistic personality. She wants to rebuild a relationship with her father and hopes that he will help her to find some good chance to perform.
But Marcello, as usual self-absorbed, leaves for Salerno: his manager, Gerardo, has found him an employment; he will deliver gift to children in a McDonald’s, dressed as Santa.
India is left alone, again. Marcello arrives in Salerno but an accident changes completely the destiny of his stay: he will find himself unwillingly involved with a center for underprivileged kids.
In the end of the funny -but also awkward- happening, Marcello will overturn the destiny of the center and he will recover the relationship with his daughter.